Kim Kardashian and Riccardo Tisci: a Timeline of Fashion’s Most Unlikely—and Interesting—Pair

It’s tough to remember a time when Kim Kardashian wasn’t the most ubiquitous figure in fashion. 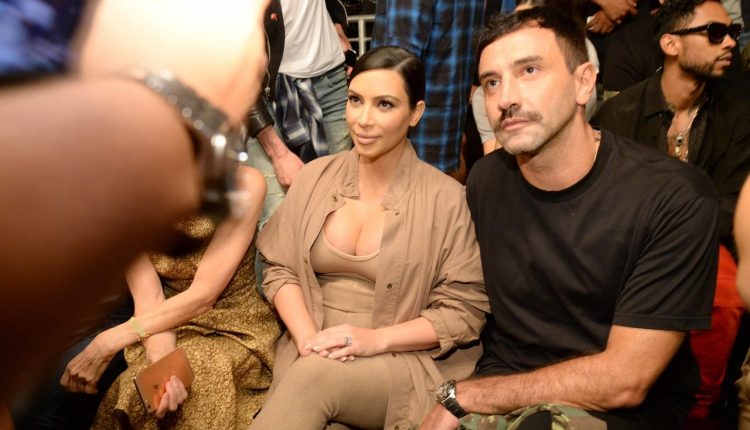 It’s tough to remember a time when Kim Kardashian wasn’t the most ubiquitous figure in fashion. But you only need to turn the clock back a mere decade to reacquaint yourself with the reality-TV star from Calabasas with a famously big behind and a penchant for body-con.

Everything changed, as the story goes, when she began dating Kanye West in early 2012. The style-savvy rapper swiftly overhauled Kardashian’s entire wardrobe (as captured in a must-see episode of Keeping Up, of course), swapping her colorful clubwear with more sophisticated designer styles. Before long, the couple was twinning in public, jetting off to the Cannes Film Festival, and schmoozing with West’s fashionable friends.

Among them was Riccardo Tisci, then creative director of Givenchy. Over the course of his 12-year tenure, Tisci completely reinvented the classic French fashion house, making it a go-to for stylish streetwear as well as sophisticated red carpet fare—and embraced the budding style icon that was Kim, even when other designers wouldn’t. 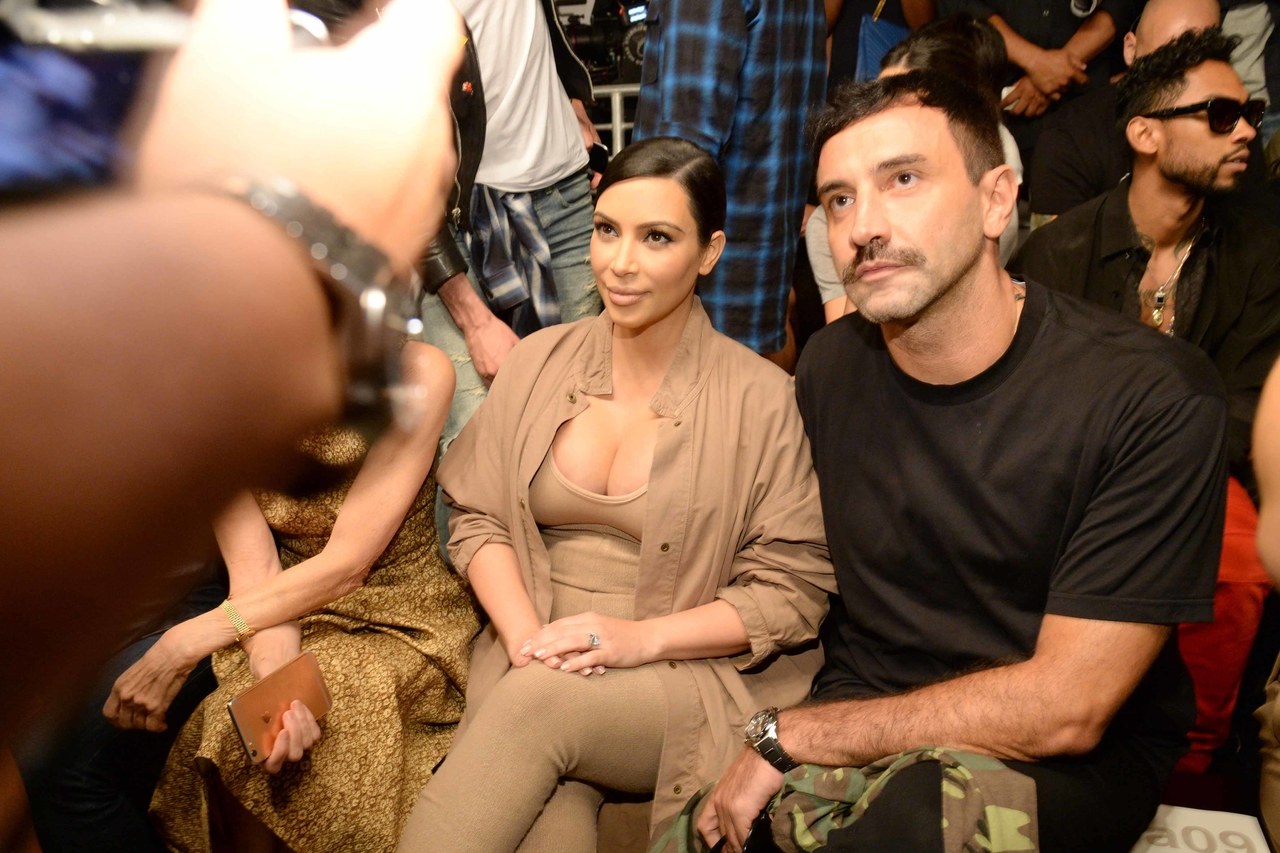 Just last week, Tisci was announced as Burberry’s new chief creative officer—and while you can bet that his A-list fans like Madonna, Rihanna, and Beyonce (who pretty much only wears Givenchy to the Met Gala and has name-checked the label in her lyrics) will continue to wear his clothes, it’s Kardashian who’ll likely be loudest in her support of Tisci’s Burberry. After all, if West created the blueprint for her fashion reinvention, Tisci served as the architect.

“Kanye and me, we did it together,” the designer told Details in 2015 of Kardashian’s noticeable style shift. “[She was accepted] by nobody… Every designer is dying to dress her now. I didn’t care what people thought about Kim. In the beginning, I met her because of my respect for Kanye, and then I liked her a lot and we became friends. I got killed because of this. But I didn’t care.” 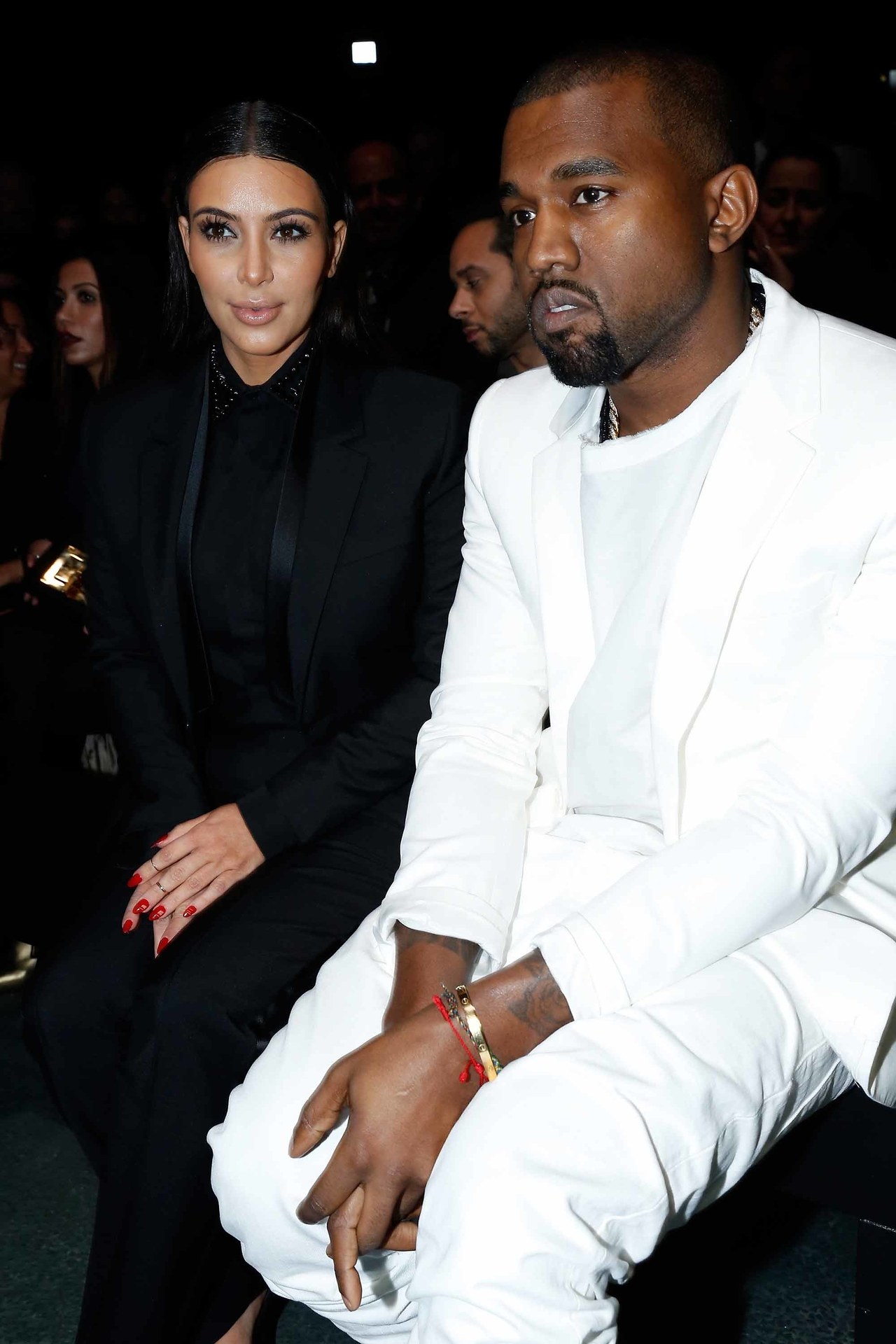 Tisci and West had initially met several years earlier, when the rapper tapped Tisci to design the album art and tour T-shirts for his Watch the Throne collaboration with Jay Z. Aesthetically speaking, West and Tisci couldn’t have more in common: Press called Watch the Throne “beautifully decadent,” an “audacious spectacle,” and “vast, dark, and booming,” all descriptors that could just as easily apply to one of Tisci’s critically-lauded collections. Between their obvious creative chemistry and Tisci’s industry influence (a Central Saint Martins grad, at the helm of an LVMH-owned company), it’s little surprise that West turned to the then-Givenchy designer to aid in Kardashian’s re-introduction to fashion. 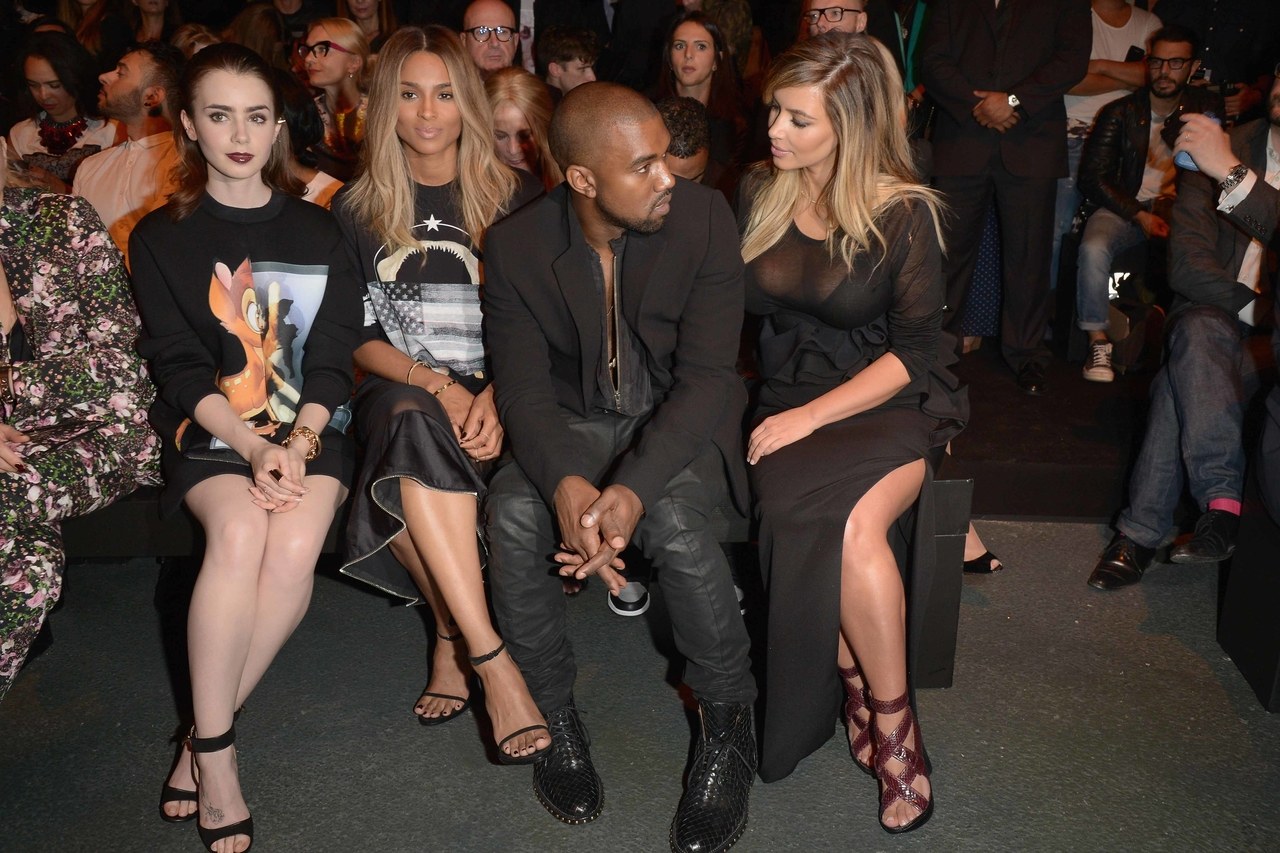 And it seems like the two took to each other pretty quickly. Throughout 2012, Kardashian was constantly photographed in the label’s bestselling fold-over boots, ruffled cocktail dresses, and tropical floral prints; and that summer, she and West sat front row together at the fashion house’s shows. (On one such occasion, Kardashian wore a sporty crop top and trousers with slicked-back hair and minimal makeup, in a sharp departure from her usual clingy metallics and layered baubles.) Over time, Tisci would go on to play a key role in what would serve as Kardashian’s high-fashion coming-out party: the 2013 Met Gala.

It’s rumored that the E! star had been shut out from one of the fashion industry’s biggest events, the Met Gala, for years. (West was reportedly forced to attend solo in 2012 because of this.) But when Tisci was tapped to co-chair the ball in 2013, he insisted that Kardashian attend—naysayers be damned. “I needed to have my gang with me, and Anna [Wintour] understood,” he told The Hollywood Reporter. “Not everyone was positive about it—fine. I say, ‘It’s your problem if you have a problem with Kim coming.’”

Tisci also dressed Kardashian, then pregnant with her and West’s first child, for her big Met Gala debut, in a long-sleeved floral gown with matching gloves that drew mixed reactions from press and fans alike—still, it was far and away the night’s most talked- and tweeted-about look, establishing Kardashian’s style-star status practically overnight. 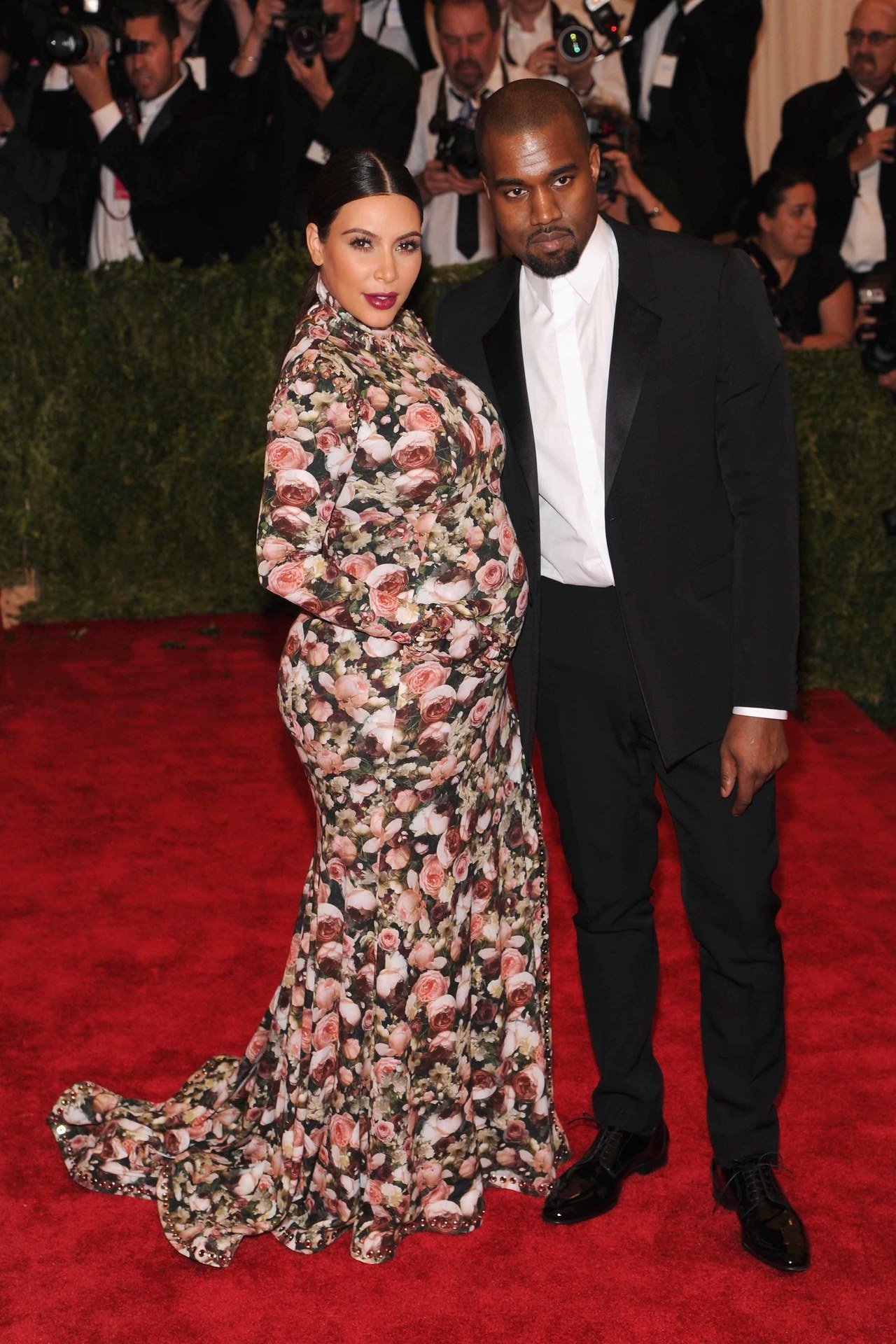 Even with Tisci’s support, though, Kardashian continued to face fashion roadblocks: After she appeared in a spread for Elle’s March 2013 issue, stylist Nicola Formichetti admitted that it was “a challenge” to call in designer samples for her shoot. “People wouldn’t lend me the clothes,” he told the magazine. “But that’s fashion snobbery.”

While Tisci’s newly-minted muse benefited plenty from their partnership, it could be said that his own brand also reaped some of the rewards as well: In 2013, Givenchy was the eighth most-Googled high fashion brand, cracking the top 10 for the first time ever—thanks in large part to Kardashian’s Met Gala dress, along with her first post-baby appearance with West at Givenchy’s runway show that September. Kardashian, meanwhile, was the year’s third most-Googled person. 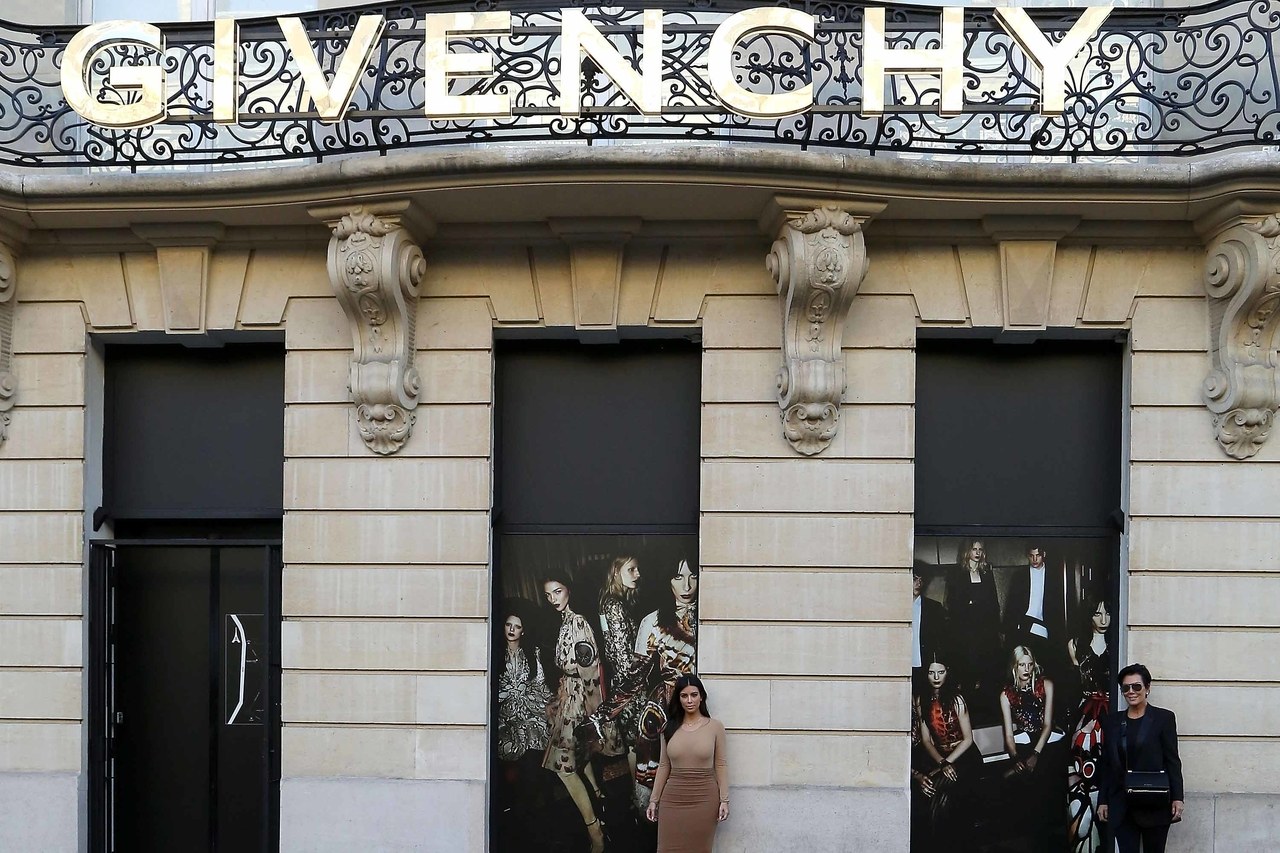 What’s more, over the course of his dozen years at the brand’s helm—half of which, it should be noted, were spent regularly dressing Kardashian and various members of her family—Tisci increased the brand’s annual revenue to over half a billion dollars, tripled its staff, and grew its store count from seven to 72, according to WWD. Not all of that success can be directly attributed to Kimye, of course, but having the ultra-famous couple on Givenchy’s side sure didn’t hurt—nor did the fact that Tisci was an early adopter of Instagram, arguably the platform where Kardashian and her family shine the brightest. (Over the course of his tenure at Givenchy, the designer amassed over two million followers on his personal account, and racked up nearly 10 million for the brand’s.) 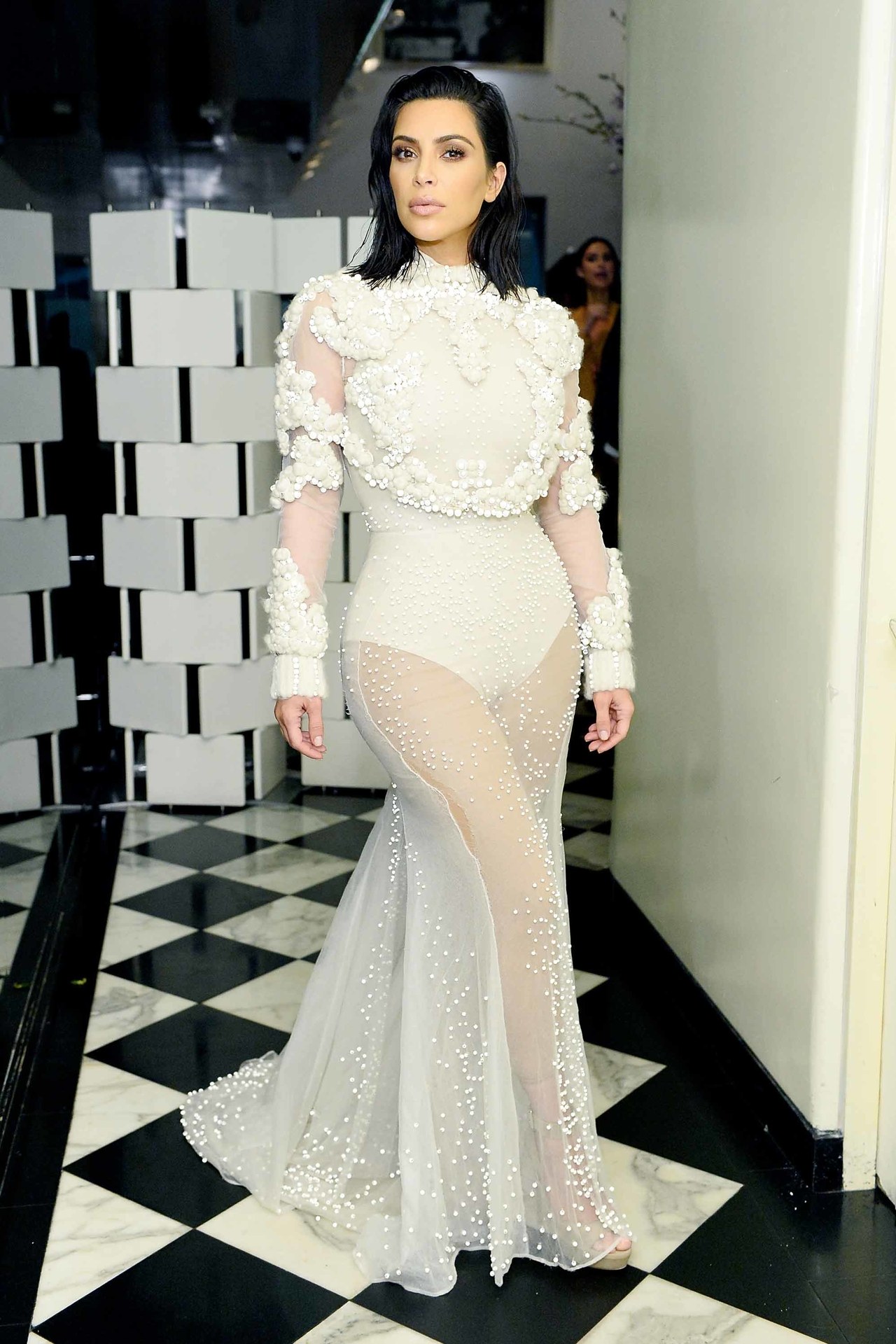 But the pinnacle of the #Karvenchy (#Givdashian?) partnership wouldn’t come until May 2014, when Kardashian and West wed in a lavish Italian ceremony attended by the likes of Serena Williams, Andre Leon Talley, and John Legend. The maker of her gown? Riccardo Tisci for Givenchy.

Tisci not only crafted Kardashian’s custom long-sleeved, lace-paneled wedding dress but he also made West’s tuxedo and baby North’s coordinating ensemble. Google searches for Givenchy doubled promptly after the nuptials.

While the label’s parent company LVMH (which also owns Dior, Louis Vuitton, and Marc Jacobs) doesn’t break out the performance of individual brands in its portfolio, it noted that Givenchy “experienced accelerated growth” in its 2014 end-of-year sales report.

Anyone who’s downloaded Kimoji or ordered a KKW Beauty contour kit can attest: Kim Kardashian is very, very good at selling stuff. But her longtime alliance with Tisci goes deeper than business or optics. 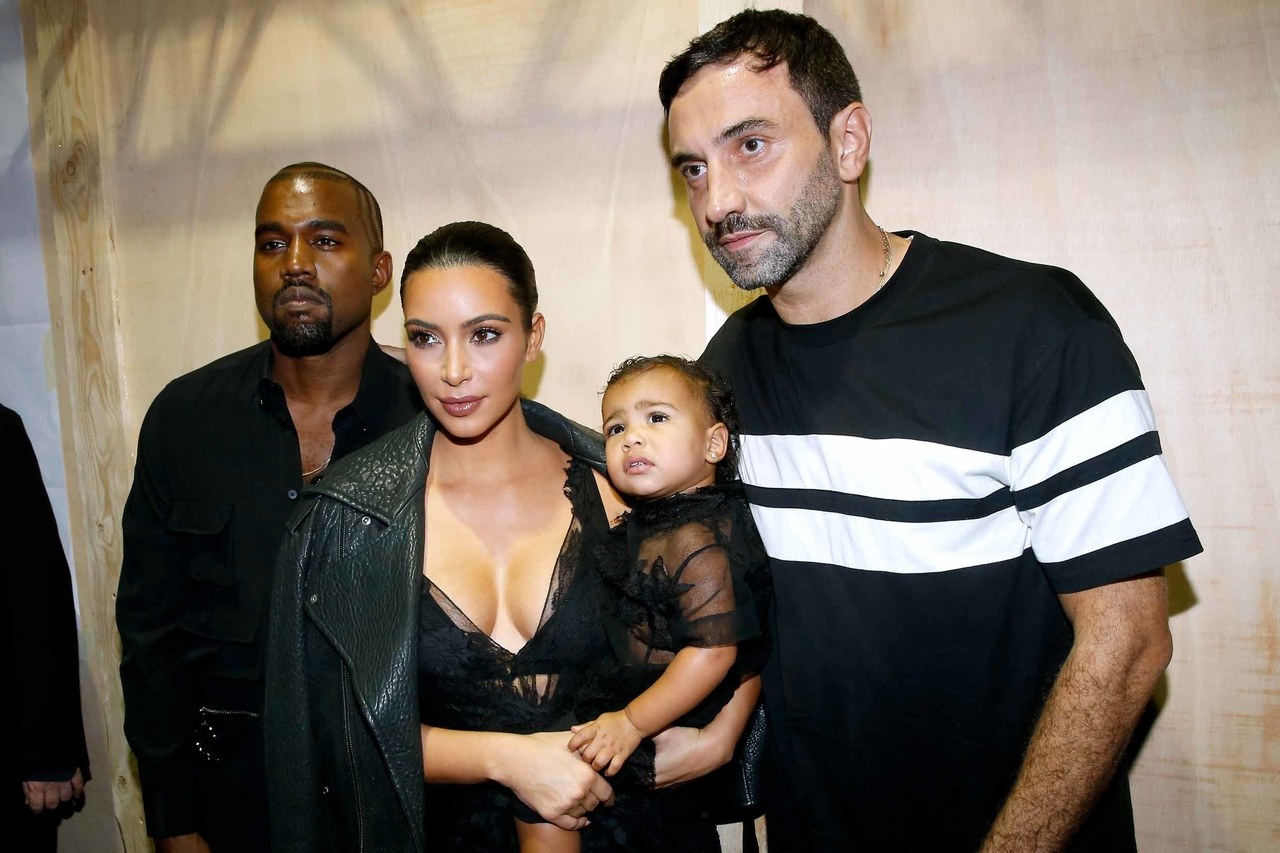 One could say that at one point, Tisci was on the sidelines of fashion himself, much like Kardashian was when they first met. When he joined Givenchy in 2005, the brand was flailing; a trio of talented designers (John Galliano, Alexander McQueen, and Julien Macdonald) had all briefly tried to turn the label around, to no avail. Tisci, with his preoccupation with Gothic motifs and love of streetwear, seemed an odd choice to lead a house long associated with Audrey Hepburn and French elegance. It took several seasons for critics to warm up to his aesthetic, but Tisci quickly found success where it mattered—in stores (where shoppers snatched up his leather Nightingale satchels and Rottweiler-printed sweatshirts_ and on the red carpet.

It remains to be seen how Tisci will shake things up at Burberry, a heritage brand best known for its trench coats and preppy checks. Once again, his signature aesthetic seems at odds with the well-established house he enters—but by now, the fashion world knows better than to underestimate Tisci’s talent. And while Burberry counts plenty of It Brits as fans (Cara Delevingne, Sienna Miller, Alexa Chung), it’ll be fascinating to see how Tisci riffs off the house’s DNA to make clothes that aren’t just stylish, but sexy. Embellished lace trenches, perhaps? Or sheer plaid slip dresses?

No matter what, expect Kardashian and West to be seated front row center when Tisci reveals his first Burberry collection in September, and for Tisci to continue dressing his longtime muse. After all, as he told The Hollywood Reporter, “I don’t use stars to sell clothes—I dress my friends.”

And in fashion, to quote Kanye West, how many of us are real friends?