Thick Face Cream Feels Good, but What Good is it Doing for Your Skin?

Sometime in my late 20s, I was wandering through the cosmetics department in Holt Renfrew when a sales clerk with well-pencilled lips asked me, “What do you use for moisturizer?” 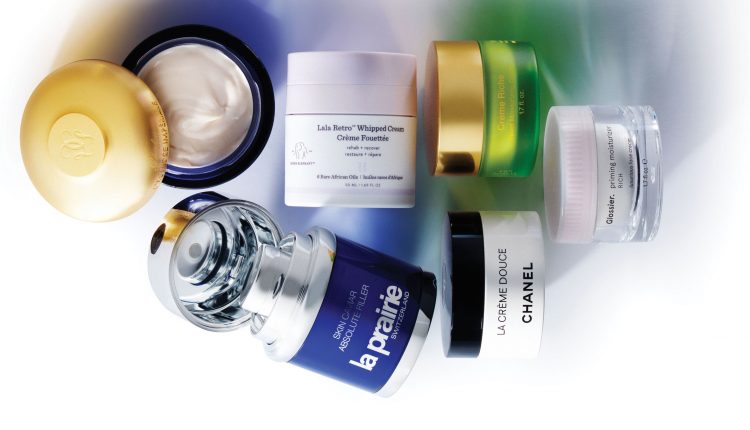 Sometime in my late 20s, I was wandering through the cosmetics department in Holt Renfrew when a sales clerk with well-pencilled lips asked me, “What do you use for moisturizer?” She had what I realize now was a masterly look of both pity and worry, as if the question itself was an act of charity. “Your skin looks dry,” she said, her voice as soft as the cotton pads she was sweeping across my (evidently soon-to-be-wizened) face. On the counter was an open jar, home to a snowy and silken hillock of hope. My face now dewy and (I told myself) more luminous, I bought the YSL cream, along with the hope of a future unseamed by fine lines.

As a child, I had cultivated the fantasy that being an adult involved things like always having a pen in your purse when travelling on an airplane and a bathroom vanity glamorously colonized with glass jars of rich face cream. I’ve been an adult for some time now, and while I never seem to have a (working) pen when I’m on an airplane, I do claim more creams in my bathroom than I have facial real estate to enjoy them. It seems that the older I get, the more compelled I am to invest in this lunacy of hope and the extravagant fantasy (delusion?) that the only thing standing between me and the ravages of time is a cosmeceutical product.

The intervention of a miracle would be more useful.

Fortunately, beauty com­panies—forever unveiling new creams packed with rarefied ingredients and featuring complex formulas and romantic backstories—market themselves plainly as being capable of the miraculous. Fresh’s Crème Ancienne, as if powered by some long-buried secret, is based on a 2,000-year-old recipe and handcrafted by French monks in a monastery located an hour and a half outside of Prague. It is so deeply moisturizing that I feel I need to move to the top of a snow-toqued mountain to properly enjoy its benefits.

Then there’s Charlotte Tilbury’s Magic Cream. As the story goes, Tilbury created it herself, first using it backstage on models and then on her celebrity clientele, who began demanding she share its genius with the world. (She finally acquiesced.) And La Mer’s Crème de la Mer—the rich cream nonpareil and arguably the most mythologized beauty product on the market—features an origin story that is the stuff of legend: An aerospace physicist, Max Huber, suffered severe chemical burns in a lab explosion in the 1950s. Twelve years and 6,000 experiments later, he confected a cream he claimed would revitalize the skin. The cult cure-all comes in a jar the colour of a whitecap and the size of a velvet diamond-ring box. Until recently, I’d spent my adult life sailing past La Mer’s gleaming counter, its wares too rich for my blood. Recently, I enjoyed my first sample. As I spread it across my face, convinced I was undoing the work of time, I thought, “This is it!”

Creams do seem magical, ever seducing the vulnerable, and even the leery, with the lure of change. But they can also seem outdated, overdressed as they are in their fancy, forbiddingly priced jars.

Fluffy creams do seem magical, ever seducing the vulnerable, and even the leery, with the lure of change. But they can also seem outdated, overdressed as they are in their fancy, sometimes forbiddingly priced jars, especially in a marketplace that is rich in fashionable face oils, highly active serums and whatever South Korean innovation is being delivered to our beauty counters. And yet these whipped wonders—parcelled promises—are finding a following in the Coachella crowd. This surprised Tata Harper, who finally launched Crème Riche after being repeatedly asked for a thick night cream ever since her Vermont-based farm-to-face brand launched seven years ago. “I felt it was an antiquated product, to be honest,” she says. “A lot of the people requesting this were millennials—even my own staff.”

Brands even younger than Harper’s, like Drunk Elephant and Glossier, have also had to churn out their own rich creams for millennial consumers hungry for something indulgent and, perhaps, nostalgic. DE founder Tiffany Masterson bills her Lala Retro Whipped Cream as “retro-style” because it reminds her of her grandmother’s. “In my head, I can see her nightstand with the cream,” she says. “I used to sneak in there and dip my fingers in it.” For Harper, these jars also summon comforting memories of her mother and grandmother. “[I remember] looking at them, with their faces all white, really indulging in this stuff.”

Of course, even if just from a scientific point of view, these creams are not your granny’s Pond’s Cold Cream. Harper’s, the result of three years of research and 36 formulations, is a velvety, hyperconcentrated mix of 43 actives, including winged kelp, red-maple bark, candle-tree leaf and an extract hailing from Burkina Faso.

In spite of these souped-up, more modern formulas, the enduring allure of thick creams in pots is less about efficacy and value than it is about pleas­ure and the romance of ritual.

In spite of these souped-up, more modern formulas, the enduring allure of thick creams in pots is less about efficacy and value than it is about pleas­ure and the romance of ritual. “Jars are still seen as elegant and lux­urious,” says Toronto-based cosmetics chemist Stephen Alain Ko. “The packaging signals to customers that the product contained is going to be more emollient, more moisturizing and much heavier on the skin, with words like ‘repairing,’ ‘nourishing’ and ‘enriching.’”

Glossier founder Emily Weiss, who came out with a rich version of her brand’s Priming Moisturizer after several requests, believes that their appeal is sensuous. “I think it’s the ex­periential nature of it: seeing the bulk in the jar, being able to scoop the amount that you want and seeing how it breaks onto your skin,” she says. “There’s something tactile about the application process and about the self-care that it takes in rubbing it in with your fingers. It’s like giving yourself a little face massage. I think that’s really enjoyable, too.”

Every morning and evening, I lavish mini dollops of these creams on my face—my skin quenched with kelp and high on red-maple bark—and I imagine (it’s a miracle!) that my complexion looks more luminous, plumper and younger. It probably doesn’t. But hope—much like wrinkles, as it turns out—springs eternal.