‘The Bachelor Winter Games’ Season 1, Episode 4 Recap: A Couple Is Engaged, but It’s Not Who You Think 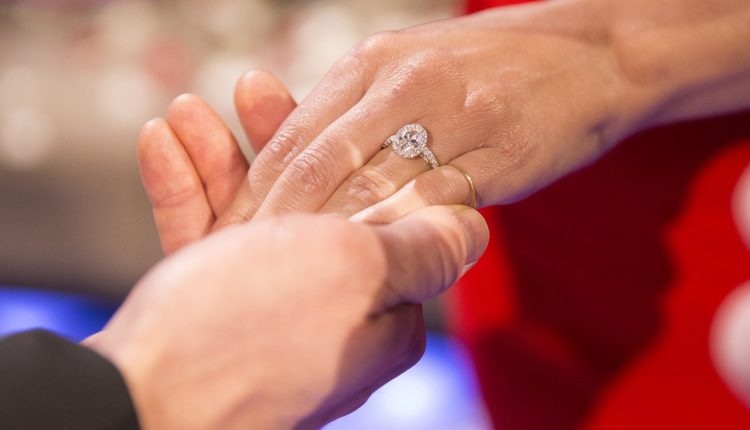 I’ll get right to the big news: A couple from The Bachelor Winter Games is engaged. But who? Oh, I don’t give up my tea that easily. Read on to find out—spoilers ahead, obviously.

The episode starts with Lesley giving us a rundown on the status of every relationship, including her own. Turns out she’s as surprised as I am that Dean has transformed from an indecisive fuckboi to a real-deal relationship cutie. Well, we’ll see—there’s still two hours of this to go. Anything could happen…including Chris Harrison stumbling through knee-deep snow just to tell the couples they’ll be ice dancing this week. Now that is commitment to his hosting duties.

Speaking of commitment to a role: Ashley abruptly asks if there are any fantasy suite dates this week. Hm, something on your mind, Ashley? Everyone laughs, including Chris, but he doesn’t answer her question! But, are there? Asking for a friend, and that friend is Ashley I.

Later, the couples meet professional skaters who help them form their routines. As Ashley points out, it’s all very Dancing With the Stars. (Synergy!) Most of them have fun with it, but tension between Bibiana and Jordan starts to creep in. I bet Virtue and Moir don’t have these problems. [Pauses to fall down rabbit hole of Virtue and Moir videos.]

When the show returns from the commercial break, we’re finally given the extended Courtney and Lily scene I’ve been waiting for. It’s as silly and sweet as I imagined, and I’m shipping this couple so hard. Lily’s afraid, though, that there’s a bad side to all of this, and she’s kinda right because we have to check in with other couples now. 🙁

There’s drama with Jordan and Bibiana that I can already tell is gonna eat up way too much time. It all starts when Jordan tells Bibi he wants to pursue something after the show and her reaction is to cry. Like, non-stop tears.

“What’s wrong with me?” – Bibiana, asking the important questions

After giving her some time to think it over, Jordan tells Bibi he just wants to have a conversation about their options but she thinks that’s putting too much pressure on her right now. Girl, I think that’s your answer. If you can’t even talk to this dude about, like, exchanging phone numbers then it’s clear you’re not ready for this. Eventually, she decides they should break up and go home. The whole thing was so drawn out that apparently everyone had gone to bed, and they’re shocked to hear what happened in the morning.

The couples don’t have too long to reflected on because they have to get to the rink to practice. There, they find out that THE Nancy Kerrigan will be judging their performances. And here I was thinking this was a budget Bachelor production.

Afterward, back at the house, Chris Harrison puts on his fanciest blazer-sweater combo to deliver a gift: FANTASY SUITES. There’s a montage of everyone getting dressed for their dates, including a scene where Luke’s, um, dick is blurred out. Lotta questions ’bout that. First of all, why keep that in, Bachelor editors? Also, Luke, why are you not wearing underwear in front of the cameras? His pants are halfway on, so does that mean he’s going commando? Please hit me up with answers.

On Dean and Lesley’s date, they decide they want to officially be boyfriend and girlfriend and take it to the next level. Meanwhile, Luke and Stassi have a tough convo about how to date while living in different countries. She says if it’s real love, she’d be willing to move. As for the fantasy suite, Stassi doesn’t feel comfortable doing it yet and Luke gives the correct response: “It is more important for me for you to feel happy and comfortable than anything else that could happen tonight.”

Next, we get to the good stuff: Lily and Courtney’s date. They both admit they’re falling in love, and it is cute.

“Oh, that’s great!” – Courtney upon learning that Lily’s falling for him.

…but she’s not willing to do the fantasy suite quite yet, so they’re sleeping in separate rooms tonight. It’s all good, though—they end with a big smooch and a smile.

On Ashley and Kevin’s date, they talk (again) about her virginity and he says he’s kinda jealous she’s a virgin (wait, what?) because her first time will be so great. Dude, WHAT? Ashley is not as thrown by this comment as me, though, because she accepts the fantasy suite date. I mean, everyone deserves a partner who makes them feel safe and comfortable. If Kevin, a man who has seen Nickelback 27 times, is that guy for Ashley then I’m happy for her.

In the morning, Courtney wakes Lily with snowballs at her window as a romantic gesture. Lesley and Dean make post-fantasy suite scrambled eggs and bacon. Stassi greets Luke while wearing a pineapple-printed onesie. And Ashley and Kevin are canoodling, their clothes thrown around the hotel room. As for that whole virginity thing, Ashley wants to keep details on what happened with her and Kevin private. Respect!

Oh, I guess we should get to that skating competition. The couples act shocked to arrive at the rink and find legit skating costumes—what did you think you’d be wearing?—but at least Dean gets into, even upping the ante with eyeliner. It’s not not hot.

Before the competition even begins, there’s a wrinkle when Kevin falls on the ice and hurts himself. But after some fussing, he’s ready to do this. Before the dances begin, though, the show make us sit through the Bachelor Winter Games anthem one last time. It’s really jarring to hear this child singing “we want to see this through” against footage of Dean and Lesley frenching, just saying.

The skating is mostly uneventful, so let’s just get to who wins: Kevin and Ashley!

They win golden roses and yeah, yeah, yeah, let’s just move on to what you really want to know: Are any of these couples still together?

Here’s what we find out at the World Tells All special:

Courtney and Lily: They rented an RV and drove across the country from New York to Los Angeles. They’re still fully in love and even decided to move to LA together after their epic road trip. Welcome to America!

Dean and Lesley: After Vermont, they’ve been spending a lot of time together. So much so that Dean does a whole fake proposal (ew, men never do this) with a key to his house.

Stassi and Luke: After the show, Luke totally ghosted on Stassi. He didn’t even get her phone number! He tries to defend himself by saying the geographical distance was too much, but Stassi (rightly) calls him out because he didn’t have the decency to break up with her instead of disappearing.

Kevin and Ashley: Ashley’s visited him in Canada, they did a trip to Boston, and he’s been visiting her in Los Angeles. So, they’re going to take it from there and see how it goes.

And twist! Clare and Benoit fell in love after they left the show! And then, he PROPOSED. And she said yes! Look, she even got a Neil Lane ring: 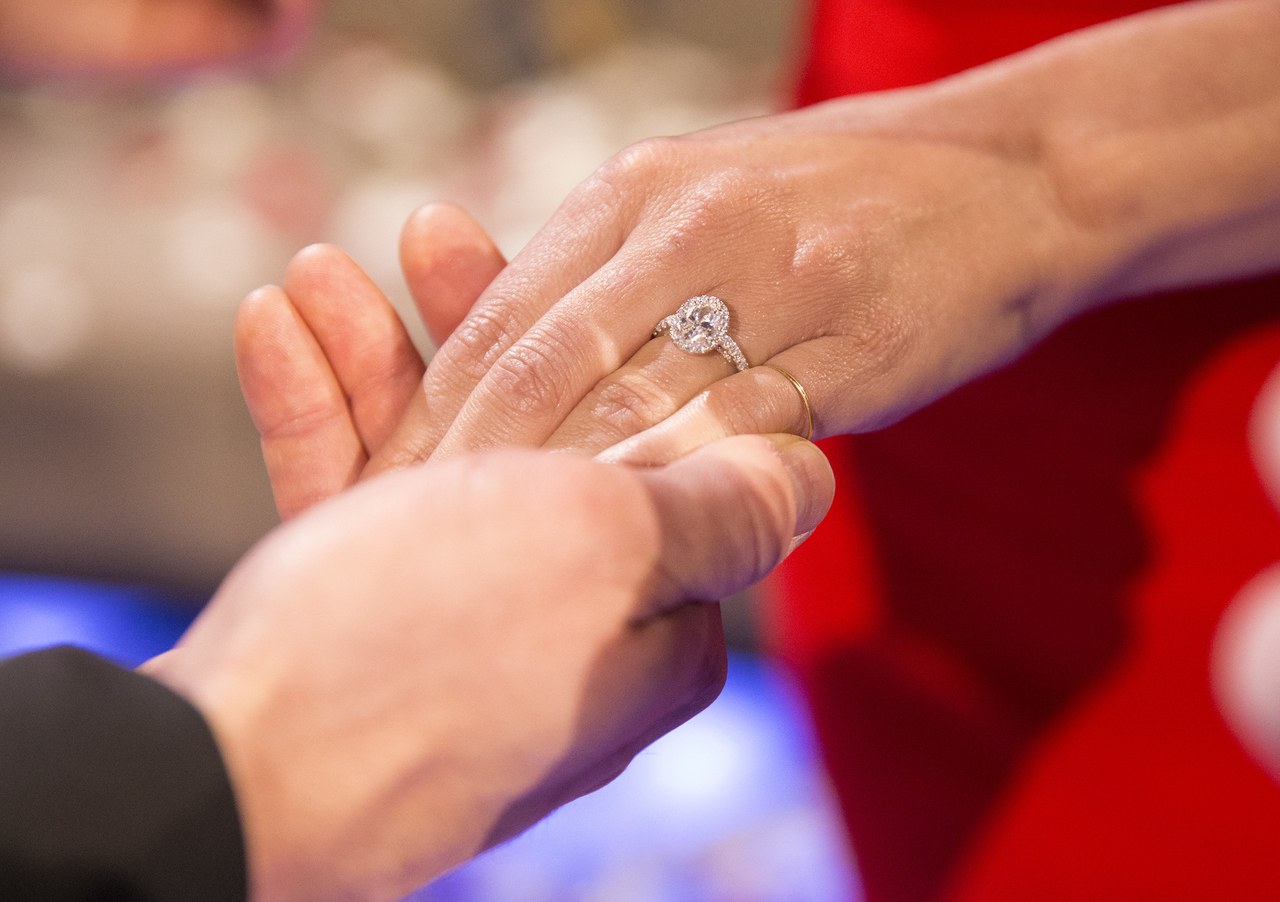 So that’s that, my friends. Congrats to Clare and Benoit!

The Fashion From The Bachelor: The Women Tell All